Lessons from FIFAfrica17: Internet Use and Human Rights

The Internet enables individuals to exercise their rights across national borders and it is increasingly playing an important role in daily life such as in education, mobile transactions, medicine, technology, denouncing human rights violations, debating government policies, etc. The online sharing of information can be done with a relative anonymity.

These distinctive features of the Internet that enable individuals to disseminate information and to mobilize people has created fear amongst Governments and the powerful. This has led to increased restrictions on the Internet and adoption of restrictive legislations.[1]

Monitoring interactions through internet is spreading worldwide. For instance, a study carried out by the Georgetown Center on Privacy and Technology in the United States has found that “one in two American adults is in a law enforcement face-recognition network.”[2]The surveillance puts the right to privacy and many other rights at risk.

Everyone should fight for his/her rights and say as did Edward Snowden: “I do not want to live in a world where everything I do and say is recorded.”[3]

As a human rights lawyer, FIFAfrica17 ignited my passion to look beyond my area of intervention – providing legal assistance to the poor – in order to boost human rights protection on the African continent.  From various interventions/panels, it became clearer how internet shutdown/restrictions can severely hinder the achievement of human rights.

I also realized that ill-management of internet poses, in some circumstances, more threats to human rights than in the offline world. Examples of such circumstances include the entire shutdown of internet in the Anglophone part of Cameroon for 93 days which forced persons to close their businesses, students to suspend online courses, researchers to suspend their online research, hospitals to be deprived of medical expertise by correspondence, cutting of jobs, etc. If the harm caused by the shutdown was to be compensated, Cameroon would spend billions of dollars to repair it.

The situation is more alerting that countries are using similar broad legislations to monitor and regulate the use of internet.  For instance, it was highlighted that countries from East Africa, such as Kenya and Tanzania, use similar legislations and methods to order intermediaries to provide private data of users, or block specific contents. It was also reported that Burundi shut down for 30 days an online newspaper for unpleasant comments made by readers. The ban was lifted with new restrictions and duties on the newspaper to review comments before posting. Governments use legislations on national security, morals, health, reputation, etc, to impose restrictions.

States do not have the monopoly of violations. Cases of sexual harassments, sexist comments, body shaming, etc, from individuals have often been reported. Violations also originate from private entities who want to protect their businesses. It had, for instance, been reported that traditional media try to discredit online newspapers which they consider to be their rival.

It appears to me that governments are busier in monitoring internet than they are in making it more accessible. Africa is less served with internet, let alone good quality one. Except for mobile internet, only city dwellers have access to internet and often at high cost, making it unaffordable to many. In Sub-Saharan Africa, internet is said to be characterized by low affordability, weak digital literacy, weak cyber security, network disruptions, slow internet, and poor legal systems.

Despite various threats to digital rights, internet providers and online social platforms do not avail users with information on internet regulations and acceptable norms. Some participants at FIFAfrica17 indicated that some requests sent, for instance, to Facebook were not answered. This is likely the case with other online platforms.

However, the grim situation described above should not overshadow efforts made by governments which of course need to be improved. It was encouraging to hear from an official from the Zimbabwean Government saying Zimbabwe would not shutdown internet.

I was and am encouraged to know that there is platform for collaboration, where efforts can be put together.  As a lawyer litigating human rights cases, I value much collaboration in the digital area because handling a case based on electronic stored information requires the support of an expert who understands where to look for information, how to make sense of it, and to interpret it.

Depending on the competent forum, there may be a need to rely on local partners to limit the cost, make easy follow up of legal proceedings and understand the specificities of the respondent state.

A good litigant should be able to propose concrete solutions in legal submissions. Well informed requests are difficult to frame without inputs from experts in various disciplines.

Through collaboration, litigants can plan better, can identify common challenges, raise more funds, and litigate more efficiently. An interactive framework can help litigators to better know and understand legal frameworks that are not conducive to a free and open internet.[4]

In conclusion, FIFAfrica17 helped me acquire new knowledge and broaden my human rights litigation perspectives. From a purely legal approach, I have shifted to confronting restrictive regimes with a multidisciplinary approach.

[1] Report of the Special Rapporteur on the promotion and protection of the right to freedom of opinion and expression, 2011, para 23

[3]  Answer to the question: “Why did you become a whistleblower?”; MacAskill, Edward Snowden, NSA files source: ‘If they want to get you, in time they will’, The Guardian via https://www.theguardian.com/world/2013/jun/09/nsa-whistleblower-edward-snowden-why 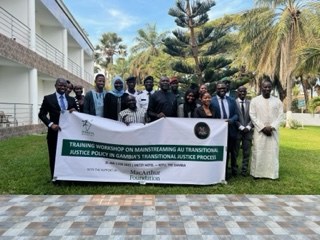