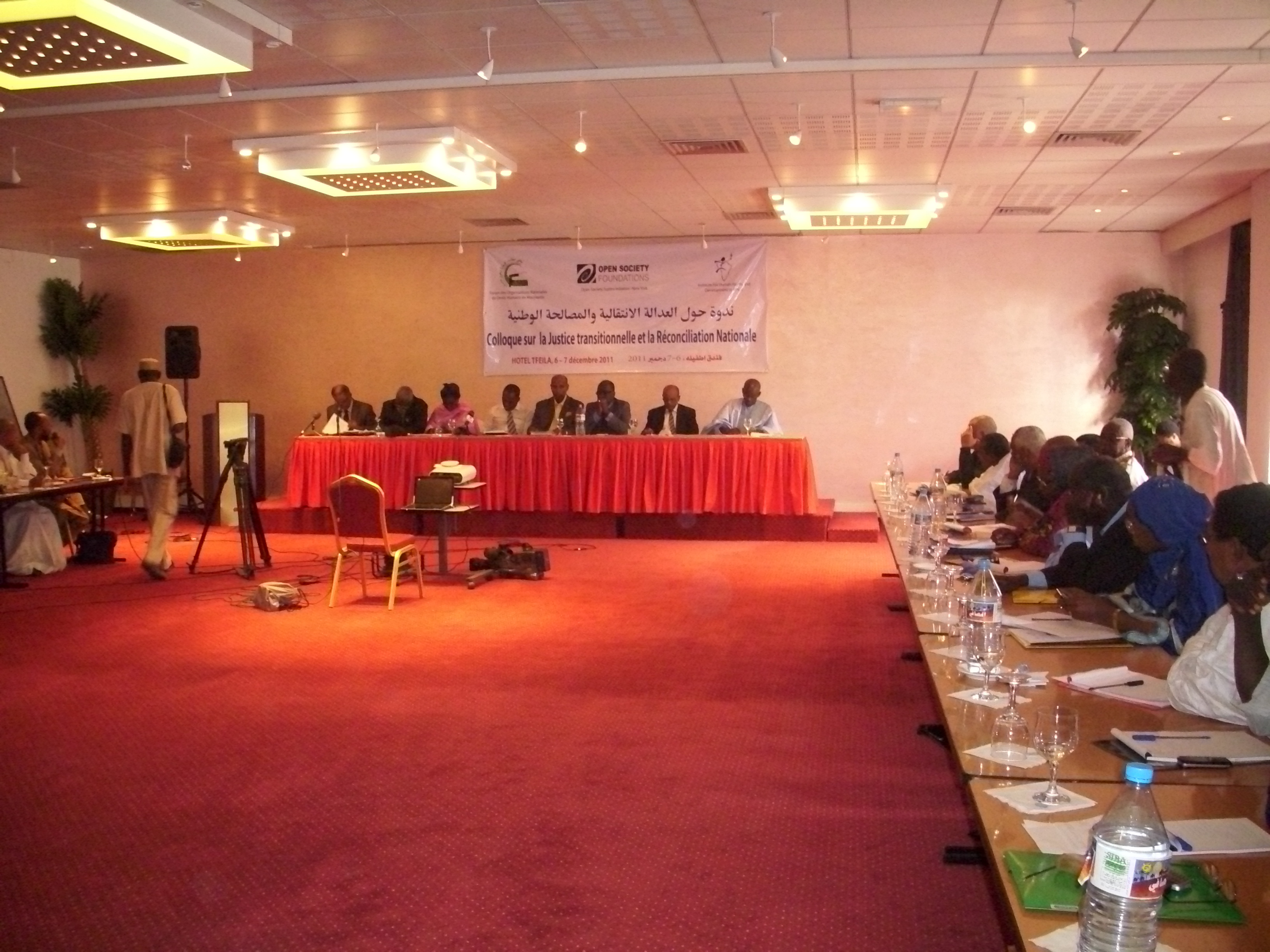 Over 70 participants have today come together in Nouakchott to discuss transitional justice and reconciliation in Mauritania. The Colloquium, organised by Forum des organisations nationales des droits de l’homme en Mauritanie (FONADH), Open Society Justice Initiative (OSJI) and IHRDA, brings together, human rights defenders, politicians, government officials and security forces officers from the whole spectrum of Mauritanian society to discuss the future of Mauritania and consider options for transitional justice models that can resolve the human rights questions facing Mauritania. The discussion will involve testimonies from participants, who are sharing openly and frankly on their experiences of violations, the struggle for justice and opinions for options for transitional justice.

The proposed transitional justice process in Mauritania will seek to identify effective options for a definitive resolution of the serious and massive human rights violations committed in Mauritania between 1986 and 1992 in Mauritania, referred to as “le passif humanitaire”. These violations were the subject of several cases filed in Mauritanian courts and later a series of communications filed before the African Commission on Human and Peoples’ Rights (ACmHPR).

On 11 May 2000, the ACmHPR issued a landmark decision on this series of 37 communications filed between 1991 and 1998, which found “grave or massive violations of human rights as proclaimed in the African Charter on Human and Peoples’ Rights” and “in particular, the rights to freedom from discrimination, life, freedom from cruel inhuman and degrading treatment, personal liberty and protection from arbitrary arrest, fair trial, free expression, free association, free movement, property, health, protection of the family and vulnerable groups and the guarantee of independent courts”.

To remedy these grave or massive violations, the ACmHPR made the following recommendations:

1. Prosecution of perpetrators: “To arrange for the commencement of an independent enquiry in order to clarify the fate of persons considered as disappeared, and to identify and bring to book the authors of the violations perpetrated at the time of the facts arraigned.”

2. Restoration of nationality: “To take diligent measures to replace the national identity documents of those Mauritanian citizens, which were taken from them at the time of their expulsion and ensure their return without delay to Mauritania as well as the restitution of the belongings looted from them at the time of the said expulsion; and to take the necessary steps for the reparation for the deprivations of the victims of the above-cited events.”

3. Reparations for victims: “To take appropriate measures to ensure payment of a compensatory benefit to the widows and beneficiaries of the victims of the above-cited violations.”

4. Restoration in national life: “To reinstate the rights due to the unduly dismissed and/or forcibly retired workers, with all the legal consequences appertaining thereto.”

5. Elimination of slavery: “As regards the victims of degrading practices, to carry out an assessment of the status of such practices in the country with a view to identifying with precision the deep-rooted causes for their persistence and to put in place a strategy aimed at their total and definitive 6. Elimination of slavery: “To take appropriate administrative measures for the effective enforcement of Ordinance No. 81-234 of 9 November 1981, on the abolition of slavery in Mauritania.”

This Colloquium seeks to discuss the implementation of these six (6) recommendations, and in particular, recommendations 1 and 3. This colloquium follows previous other consultations done since 2007 when the first democratically elected president of Mauritania, Sidi Ould Abdellahi, convenes the “National Consultations Days” on 20-22 November 2007. These consultations led to the mobilisation of actions towards the organised voluntary return of deported Mauritanians in Senegal.  These were followed by the Conference on reinforcement of national unity in Mauritania organised by NDI on 22-23 January 2008. FONADH, OSJI and IHRDA also held in December 2008, 2009 and 2010, colloquia which focused on the monitoring return of deported Mauritanians and the problems faced with full reintegration and reparations. On 30 March 2011, the UN Office of High Commissioner for Human Rights (OHCHR) in Mauritania also hosted a conference on human rights and transitional justice.

These many diverse initiatives show a growing commitment in Mauritanian society towards a lasting and effective model for transitional justice and a definitive resolution of the human rights question in Mauritania.